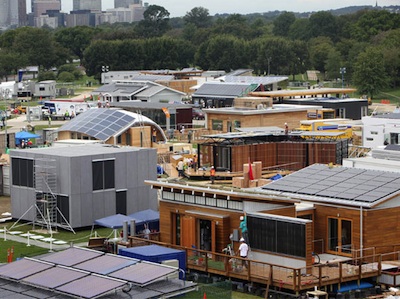 This year’s Solar Decathlon is off the beaten path in D.C.

For the fifth time since its launch in 2002, the U.S. Department of Energy’s Solar Decathlon kicked off on September 23 in Washington, D.C. But following complaints that the collegiate design-build contest was damaging the Mall’s lawn, it was moved to a new location along an isolated stretch of the National Mall tucked between the Tidal Basin and the Potomac River. The new site feels more rural than urban. This year’s village, which used to extend down the Mall in two long rows, was instead compactly arranged along four lanes. It was open to the public through October 2.

Over the past two years, 20 student teams from around the United States, and from Canada, Belgium, New Zealand and China, have designed and built sustainable, energy-efficient houses for the contest. (Only 19 are on display; Team Hawaii withdrew.) Overall, the houses seem more modest and less technology-driven than the last time, which is largely due to a new component in the judging: affordability.