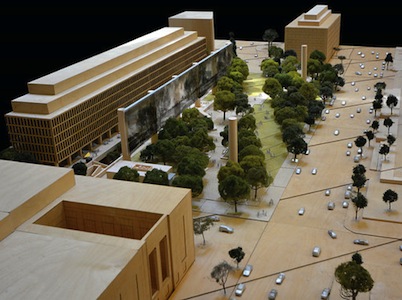 At its monthly meeting on September 4, the National Capital Planning Commission (NCPC) heard an update on Frank Gehry’s embattled design for the Dwight D. Eisenhower Memorial in Washington, D.C. Craig Webb of Gehry Partners presented a revised design with significant differences from the one the commission rejected, by a vote of 7 to 3, back in April. Two of the three metal tapestries that formed Gehry’s most distinctive architectural move are gone. There are now eight columns defining the four-acre site instead of 10, and the one at the northwest corner has been moved back from Maryland Avenue, in response to the commission’s complaint that it obstructed the view to the U.S. Capitol.