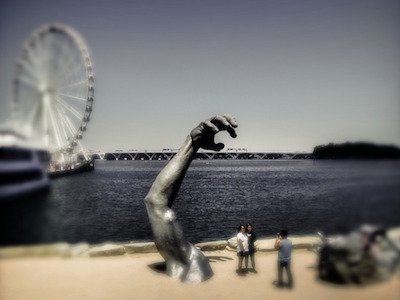 Walking back down the pier at National Harbor after a ride on the Ferris wheel, something caught my eye: a lighthouse. More accurately, it was a miniature replica of a lighthouse set incongruously on top of a building whose brushed-chrome panels and greenish glass seemed to whisper luxury condos. And next to the little lighthouse, amazingly, there stood a woman gazing out toward Virginia, her skirt and scarf billowing in the breeze. It was a lovely day and the view up there must be great, but even so: What the hell was she doing?

I drew closer—almost in the shadow of the building—before I realized. The woman was a mannequin, a store-window prop draped in flowing garments. Welcome to National Harbor, where relentless fakery has somehow, in a few short years, birthed a real place.

When people in D.C. and its innermost suburbs talk about National Harbor, it’s often with a sense of confused annoyance. What is it, where is it, and why would anyone go there? I first visited back in 2008, when only a lonely row of buildings along the water and the Gaylord National Resort and Convention Center, the largest hotel on the East Coast, occupied the space.

I returned last week to find a downtown jammed with people. Yes, National Harbor is cheesy and full of tourists. But it’s also home to a few thousand permanent residents. And taken on its own terms as a city-fragment devoted to fun, it works surprisingly well.