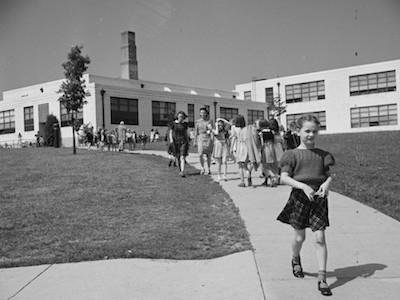 How the Green New Deal Could Retrofit Suburbs

The original New Deal included a bold attempt to rethink suburbia. We can still learn from it.

Last week, Representative Alexandria Ocasio-Cortez and Senator Ed Markey introduced a resolution that gives the heady vision of the “Green New Deal” some broad policy outlines—although the specifics are still up for grabs. Their resolution calls for a national, 10-year mobilization that would repair and upgrade infrastructure and switch the country over to 100-percent clean energy, among other goals.

As its name makes clear, in scope and ambition, the Green New Deal has strong parallels to the original New Deal, with its massive public-works projects like the Hoover Dam and jobs programs such as the Civilian Conservation Corps. But, amid calls for the Green New Deal to address wasteful land use, a smaller, more obscure initiative of the old New Deal is also worth revisiting: the greenbelt-towns program, undertaken by the short-lived federal Resettlement Administration (RA).

With that program, the U.S. government threw its weight behind a progressive approach to urban planning and offered an alternative to helter-skelter suburban sprawl. The government could do so again, and work to fix suburbia’s lack of sustainable, affordable housing, and car dependency. A 21st-century agenda would learn from the New Deal’s failings, prioritizing racial and social equity and working with existing communities rather than imposing a top-down plan.