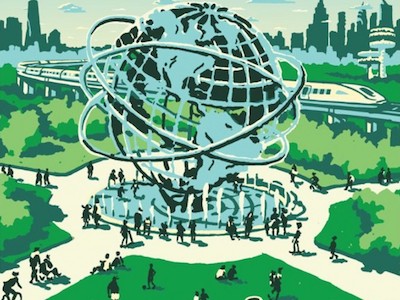 On Friday, Representative Alexandria Ocasio-Cortez gave Twitter users a look at two new posters her office is issuing to promote the Green New Deal, apparently the beginning of a series of GND-themed posters.

The posters were designed by the New York firm Tandem, which was also behind the congresswoman’s election campaign. Scott Starrett, a co-founder of Tandem, created them with artist Gavin Snider. Starrett said that more posters, of local parks in cities other than New York, will follow, but the timing of their release is uncertain.

If the posters seem at first glance to have a retro vibe, you’re not wrong, as the congresswoman confirmed in a follow-up tweet. The chunky all-caps type, the emphasis on places of natural beauty, and even the color palettes are intended to evoke posters produced nearly a century ago by a singular federal program in American history: the Federal Art Project, an office of the New Deal-era Works Progress Administration. (The program survived the termination of the WPA for a few years within a new agency, the Federal Works Administration.)