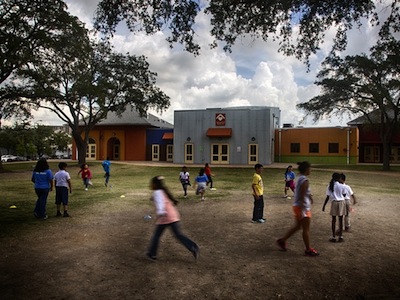 How to Tackle Growing Suburban Poverty

Houston’s Neighborhood Centers has spent years addressing this hidden problem—which will spread throughout the U.S.

Think of a nonprofit that serves the poor, and the first image that comes to mind will likely be distinctly urban: an old, brick YMCA building, maybe with a neon sign announcing it to passersby, or the line for a soup kitchen spilling onto a city side street.

Ever since European immigrants flooded into American cities in the late 19th century, the charitable organizations that serve the vulnerable have clustered in urban centers. After World War II, white flight and the explosive growth of the suburbs only served to sharpen the divide. The suburbs were doing fine, it was long assumed, while hollowed-out cities needed help.

Now city centers are enjoying a revival, and poverty is growing faster in the suburbs than anywhere else. Experts worry that the urban safety net that poor people rely on may not stretch to fit suburbia: How do you get to a distant clinic or food bank when there’s no bus, and you don’t have a car? Can vast counties and unincorporated towns rally to the aid of their neediest residents?

The success of one Houston-area nonprofit offers lessons for alleviating poverty and building communities across a sprawling urban region. It also shows us what precarity looks like in the 21st century.