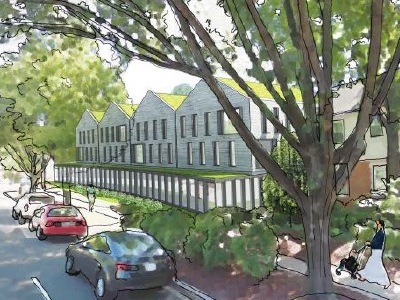 Mayor Muriel Bowser’s plan to close the dysfunctional D.C. General homeless shelter and open several smaller ones around the city drew hundreds of residents to question-and-answer sessions held in each ward last week. Among the many questions that remain about the plan: What will the new shelters look like?

The mayor’s slideshow includes architectural renderings of some of the proposed facilities: a row of gabled, green-roofed structures in Ward 3; a boxy building with purple and yellow accents in Ward 4. It’s not clear whether these concepts are purely hypothetical or something more. According to Department of General Services spokesperson Kenneth Diggs, no final decisions have been made regarding the design or construction of the shelters.

As the city develops a strategy to temporarily house more than 200 homeless families, it should draw on the successful models already here. One is N Street Village, an organization that has helped vulnerable women since 1972. N Street’s main facility at 14th and N streets NW combines a shelter, a live-in recovery program, and apartments. Designed by Shalom Baranes in the ’90s, the newer part looks like market-rate apartments from that period, faced in brick with postmodern touches that dispel any institutional image. The design also incorporated four historic townhouses, a decision that kept preservationists happy and placated some worried neighbors.