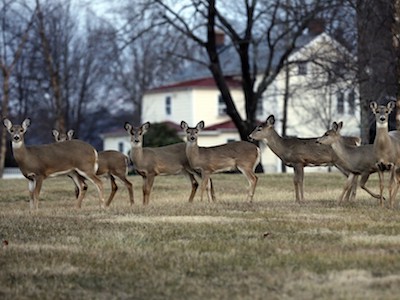 The Deer in Your Yard Are Here to Stay

The deer population of the eastern U.S. has exploded and cities are trying to keep it in check. But the options available to them are limited, and fraught.

A decade ago, deer were a rare sight on Staten Island. White-tailed deer are thought to have abandoned the island in the late 19th century, pushed by human development to open land in nearby New Jersey. In 2008, the estimated deer population of the 60-square-mile borough of New York City was only 24.

Then the deer came back, swimming across the Arthur Kill and Raritan Bay from New Jersey in search of new habitat. And they reproduced—boy, did they reproduce. An aerial survey of the deer population in 2014 put it at 793. By 2017, the new estimate was between 1,918 and 2,188, an increase of 9,000 percent in just nine years.

To various degrees, towns and cities across the Northeast have been seeing an ongoing resurgence of deer populations in recent decades, as suburbanization patterns deepened and hunting practices faded. If you live anywhere outside of an urban downtown, you’ve probably noticed this trend yourself.

Deer are cute. We’ve all cried watching Bambi. So what’s the problem?

Well, there are a few. Hungry deer will eat (or trample) almost anything in a garden, becoming a pest for urban and suburban homeowners. Over-browsing by deer depletes the undergrowth of woodland, threatening birds’ habitat and the regeneration of trees. And when deer wander into the road, the results are not so cute. There are about 1.25 million collisions between cars and deer, elk, and moose annually in the United States, according to the insurer State Farm, and these cause around 150 human fatalities, and countless animal deaths, each year.