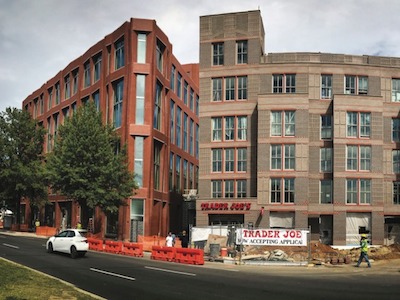 Most architects working today cherish the purity of a clean line and a plain, smooth surface—but not Amy Weinstein. If you’re walking around Capitol Hill and you see a building with a multicolored facade, elaborately worked railings, or bricks arranged in bold patterns, chances are it’s hers. As opposed to the “less is more” credo of Mies van der Rohe and other modernists, Weinstein’s philosophy could be summed up in the words of her former boss, the famous postmodern architect Robert Venturi: “Less is a bore.”

Over her career, Weinstein has completed nearly 20 projects on the Hill, a neighborhood brimming with her favorite material, red brick. The largest and probably most admired is the Townhomes on Capitol Hill, an affordable housing complex built under the Hope VI program.

Weinstein’s latest, though, is more complex and more prominent than her past projects on the Hill and stands six stories high. It’s a once-in-a-generation addition to the historic area around Eastern Market.