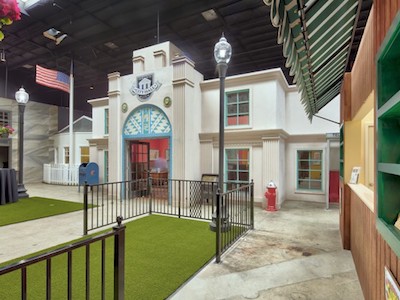 Why a ‘Memory Town’ Is Coming to Your Local Strip Mall

Weeks after opening near San Diego, a model town for treating dementia is set to be replicated around the U.S.

On August 13, a brand-new town in Southern California welcomed its first residents. They trickled through the doors of a generic beige warehouse on a light-industrial stretch of Main Street in Chula Vista, a San Diego suburb. Then they emerged in Town Square®—a 9,000-square-foot working replica of a 1950s downtown, built and operated by the George G. Glenner Alzheimer’s Family Centers. Unlike the businesses around it hawking restaurant supplies and tires, Town Square trades in an intangible good: memories.

The imitation town (which I wrote about previously in The Atlantic) is the biggest U.S. investment so far in what eldercare specialists call reminiscence therapy. In reminiscence therapy, caregivers encourage people with dementia and age-related cognitive impairments to talk about past events and their own life experiences, often aided by old photos, music, and other prompts that stimulate memories. Studies have shown that reminiscence therapy has positive effects on the mood, cognition, and communication level of dementia patients.

Our strongest, most enduring memories tend to be the those formed in adolescence and early adulthood, from roughly the ages of 10 to 30. Reminiscence therapy targets this age range, and for those Silent Generation members now in their 70s and 80s, that means the 1950s. (A person who is 80 in 2018 would have been 12 in 1950.) So the design of Town Square is intended to evoke the years between 1953 and 1961. It’s decked out with touches like a rotary phones, a 1959 Ford Thunderbird, a classic jukebox, portraits of period Hollywood stars, and vintage books and magazines. As the years go by, these will be replaced by more recent, period-appropriate prompts.